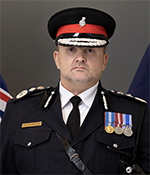 Prior to taking up his roles with the Turks and Caicos Police Force, Commissioner Botting served as the Chief of Police for the Island of St Helena, a British Overseas Territory in the South Atlantic, this following a 30-year career with Sussex Police in the UK.

He has over 39 years’ experience across a broad range of policing areas working at a senior level for over 12 years in UK and overseas policing contexts. He has an extensive background in strategic leadership and command, being highly competent operationally in all aspects of policing and has led the delivery of relevant training locally in the Turks and Caicos Islands to Senior Force Commanders.

He has experience of leading a culturally Diverse Police Force policing in a small island context with a culturally diverse community with over 7 years’ executive level policing experience across two British Overseas Territories.

In terms of disaster management, Commissioner Botting led the Force through two hurricanes (Irma and Maria) as well as an aircraft crash in December in 2017.

Commissioner Botting has also led the Force response to the COVID 19 pandemic, working at a senior level within Government as part of the country response.