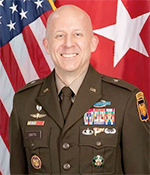 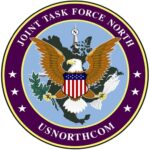 Prior to assuming command of JTF-N on December 14, 2022, Major General Smith served as the Vice Director of Operations, The National Guard Bureau, J-3/4/7, Arlington, Virginia from February 2022 to December 2022.

His green-tab assignments include command of H Company, 121st Infantry (Airborne) (Long Range Surveillance) while the company was deployed to Iraq in 2003. He served as commander of the 1st Battalion, 121st Infantry Regiment while the battalion was deployed to Afghanistan in 2009-2010. In 2016, Major General Smith assumed command of the 48th Infantry Brigade Combat Team and commanded the brigade in Afghanistan in 2018-2019.

Major General Smith was commissioned as an Infantry Officer in 1993.  He holds a Bachelor of Science in Business Administration from University of Delaware, a Master’s in Business Administration from the Goizueta Business School at Emory University, and a Master’s in Strategic Studies from the United States Army War College. He is also a graduate of Harvard University’s Homeland Security Seminar.

He is married to Mrs. Laura Bosler.